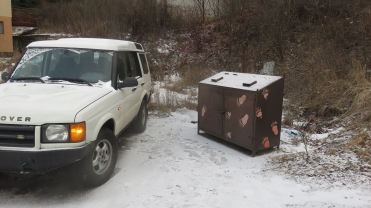 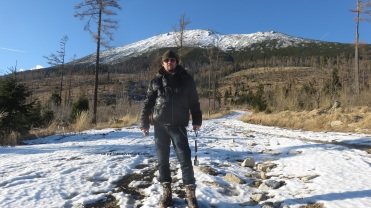 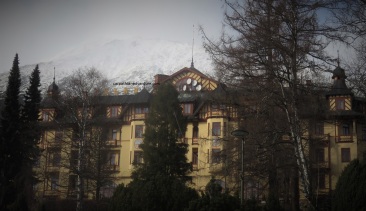 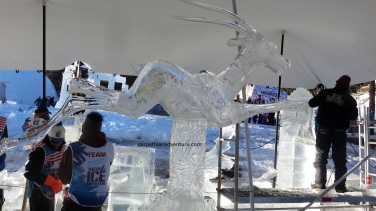 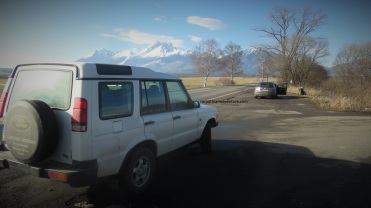 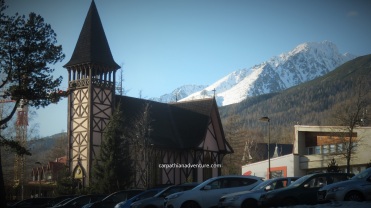 We’ve just got back from a few days break away in the Tatra Mountains in North Central Slovakia. Thankfully, it wasn’t having the same weather as we have had for the last few months. The air was clear, cold and bright rather than damp, foggy and swampy – although we do have a lot more snow than there. It sort of felt like Spring.

We stayed at a friend’s Pension (another post will cover that) in the historic mountain ski resort of Stary Smokovec. On Saturday there was an international ice sculpting competition up the mountain at Hrebienok so we talk a wander up the muddy rock track to check it out (we came down on the road as it was way too slippy and dangerous to descend). My legs are still aching as I’m out of condition. The wind roared and really ripped my ears and face.

It was good to get away from where I live for a bit. The Tatra Mountains have many foreign visitors and the resorts are expensive so it was nice to see a change in cars and fashion. I like the bush but sometimes a bit of luxury is called for.

The photo of the bin with paw prints on it is from outside my friend’s pension. In October last year a mother bear and her two cubs (brown bears, called Grizzlies in the US) tore up the outside of the bar, including their leather furniture, so they now have a bear-proof bin. The sow was using the metal security as a back scratcher. Two policemen, who came to scare the bear away as it was clawing up the place, ended up being chased away instead. It’s a really dumb idea to approach a mother bear with cubs…. My friend says there are often bears wandering along the road outside their place at night and she will let me know when they start appearing again so I can go and photograph them – preferably from the safety of the balcony.

Here’s a video of what bears do to non-bear-proof rubbish container:

As for my Discovery, Vlochka, she has led me to believe that the Land Rover adventure thing is all about whether the car will start or not, or if it will actually get you the whole way home or break down. After she didn’t start yesterday (I was supposed to pick my wife and kids up from the wellness centre at Hotel Kontakt), I spent many hours with my friend’s partner trying to work out what the problem was. Alternator? Starter? Central locking? A short or loose connection? The air conditioning? The new radio? And then she started. I really need to take her to the nearest city to a Land Rover dealer for some proper diagnostics. At present, she’s just not what I’d call reliable. Immense fun when she is working but not exactly stable. She sort of reminds me of a spoilt, pretty gold-digger – If I’m going to ride her then I’m going to have to spend a lot of money on her first….

My name is Edward O'Toole and I live in one of the wildest, most beautiful parts of Europe, in the Carpathian Mountains of Eastern Slovakia. Life is an adventure - both physically and metaphysically... I've been living out here for the last 22 years, along with my wife, 3 kids and Jack Russell. My main interests involve bushcraft, prepping, survival and wilderness living (self-sufficiency and self-reliance), ecological, green, smart and natural solutions, motorcycles and motorbike club life, writing and art (I have 7 published books), and exploring the paranormal. For more about my lifestyle, art and writing visit http://www.edwardotoole.com View more posts